The Golden Nugget in Atlantic City is in the midst of a major revival, thanks in large part to the overwhelming success of its online casino brand.

More than 200 of those titles have been ported to smartphones and tablets — that’s more than any other NJ-based app. Golden Nugget’s mobile casino also features more game diversity than the average app, with an extensive array of Live Dealer, video poker, and table games sitting alongside the usual slots.

Despite its large size, the Golden Nugget mobile app hums along. Suffice it to say, players will have to look hard to find any fault with this mobile port. 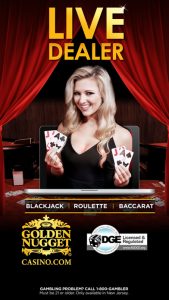 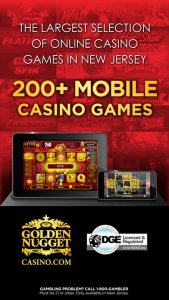 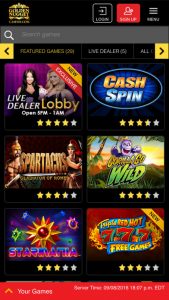 Use our exclusive Golden Nugget bonus code BONUSSEEKER at signup to receive $10 free — no deposit necessary.

There are a couple conditions tied to this offer. Namely, players will have to playthrough the bonus 10 times on slots before it becomes cashable. The cashback rate on slots is 10 percent, which is among the best no-deposit bonus rates in the industry.

Also, the bonus funds plus winnings will be removed if the wagering requirements aren’t met within seven days.

Players who signup via mobile are eligible for this offer.

In order to withdraw their bonus funds and winnings, players will have to run through their bonus 10 times on slots, and 50 times on other games.

That’s really not a bad deal at all, as plenty of Golden Nugget mobile slot games return 95 percent or more. Factor in a 10 percent cashback rate, and it’s the player, and not the house, that will have the edge.

There isn’t much that Golden Nugget’s mobile app doesn’t get right, but we’ve identified a couple of areas where improvement is needed:

Golden Nugget Casino offers a wide array of games on its mobile app — more than any other NJ-based operator.

Just under 90 percent of Golden Nugget’s mobile games are slots.

These days, if a new slot title goes live on the main site, mobile players can expect it to hit smartphones and tablets shortly thereafter, if not in parallel.

Players can find the latest titles under the “New” tab, and the hottest ones under “Featured.”

Golden Nugget Casino even has a few exclusive titles and even more mobile exclusives.

The vast majority of the app’s virtual terminals are penny slots featuring three to five reels, one or more bonus games, and a vast selection of betting denominations.

For those currently unfamiliar, Live Dealer is the juxtaposition of online and live table games. The chips and calculations are handled digitally, but physical playing devices (cards, wheels, etc.) determine game outcomes.

Live Dealer games are streamed from a dedicated studio located within the land-based Golden Nugget Casino in Atlantic City. Players can interact with live dealers in real-time via a social chatbox. They can also communicate with other players, and even toss tips the dealer’s way.

Currently, Live Dealer games are spread across blackjack, roulette, and baccarat, with more formats expected soon. The returns for these games aren’t optimal, but not terrible either.

The games run from 3 p.m – 3 a.m. seven days a week. The games are only available on the desktop client and smartphones, which is a bit of a drag. But knowing the Golden Nugget, it probably won’t be too long before the games gravitate to tablets.

Golden Nugget mobile does fairly well in the video poker department, with 12 games offered. A few of these games are near replicas of one another, but most are independent.

Unfortunately, there are no multi-line games available, like there are on Golden Nugget’s main site. However, the single-line games generally feature favorable returns. Some of the best games include:

What’s also nice is that players can wager tiny amounts and still get paid the full amount on Royal Flushes. This stands in stark contrast to land-based machines, which the only pay out big on Royals when five coins are bet.

These are all solid games, with above-par returns and easy-to-use controls. The single deck blackjack titles is particularly good, as it pays 3:2 on naturals (rare for a single deck game), and features an interface that was clearly designed with the mobile player in mind.

For better or worse, Golden Nugget Casino’s mobile interface is a near carbon copy of the one from its main site, with mouse clicks substituted for swipes and taps.

The app retains the main site’s tabular interface, but it doesn’t work as well on mobile, as only a smattering of the tabs can fit on the screen at once. Still, better that than no tabs at all.

Another nice touch, players will be provided with game info before they sit behind a virtual terminal or table game. Give Golden Nugget credit: not many online casinos are this transparent about a player’s chances of winning.

On smartphones, the apps numerous account management features such as the cashier, bonus tab, loyalty section, and account details, are tucked away in a side menu. On tablets, they’re more prominently featured.

The mobile UX is at its best when players are wagering. Controls vary from game to game, but for the most part they’re responsive and conveniently located. Not to mention, nearly all of the convenience options main site players are accustomed to have made the move to mobile.

For a high-powered app, the system requirements are noticeably low.

Currently, iPhone and iPad users will need iOS version 7.0 to install the software. For Android, version 4.2 and above is required.

Of course, these requirements will scale up over time. But from the looks of it, as long as players have a device that’s within a few versions of the most recent update, they’ll be just fine.

In order to install the app, Golden Nugget players will need a smidge of storage space — and we use that term quite literally.

The fact is, Golden Nugget eats up less space on a game-by-game basis than any other NJ online casino app. On iOS the app takes up just 10 megs; on Android, roughly five.

The app is not available for Windows Phone, Blackberry, and other providers. This shouldn’t be an issue for most, as Android/iOS comprise over 99 percent of the mobile market.

Stability is not an issue. The games run fluidly, and we did not experience any disconnects on Android or iOS powered devices.

However, game loading times tend a bit toward the slower side, and menu loads are even slower. This problem was persistent on modern devices hooked up via a WiFi connection.

Installing the Golden Nugget Casino app is a cinch. Simply follow these steps:

A few notes worth pointing out. Android users must enable downloads from “Unknown Sources,” otherwise they won’t be able to get the app. This feature can be enabled from a user’s “Settings” menu — the Golden Nugget app installer will lead players theirs during the download process.

Also, iOS users can install the app via iTunes. There is no difference between installing the app this way or via the main site. It’s more a matter of personal preference.

Once installed, new players can register an account from the app, and sign up for our exclusive no-deposit and first-time deposit bonus offer.

There is no shortage of depositing and withdrawal options on Golden Nugget Casino’s main site, and by extension, its mobile app.

For deposits, players can choose from the following:

As far as withdrawals, mobile players won’t have as many options, but still quite a few: